Get fresh music recommendations delivered to your inbox every Friday.
We've updated our Terms of Use. You can review the changes here.

The Sky's The Limit 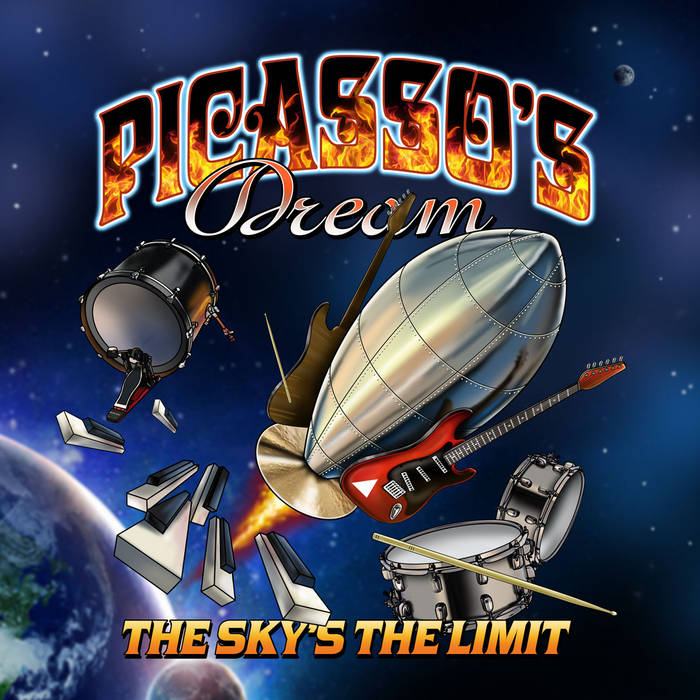 As Chase and I practiced with other individuals in the low ceiling basement, individuals who wouldn’t stop playing, we both had a moment where we looked at each other and went “we’re not the crazy ones here right?”

It would then be my start of my journey into the musical realm. At 35 years old a little voice said “If you don’t do this now, you won’t have a chance later.”

I had always been a fan of Progressive Rock. Growing up as a fan of Genesis and Phil Collins didn’t help my outcast status in High School. I didn’t care. There was something in this music that spoke to me, and my interest in music continued when I went to Art School in Columbus Ohio and finally met others with the same musical tastes as myself.

As I progressed through the daily grind of a ‘web programmer’ I would travel from home to work and construct playlists of my favorite songs in my head. I would sing at the top of my lungs, and when I went to bed at night songs I had never heard of would come to me in my dreams. Even as I enjoyed my world in computers, I longed for a connection to a world of music.

Around age 32 two things occurred that seem to direct myself into this world of creative musical endeavors. The advent of Podcasting came about and some local friends and I would start ‘A Shanty No Lemon’. This became one of the largest LGBT podcasts on iTunes and the resulting work would help to fine-tune my mixing skills. ‘A Shanty No Lemon’ lasted for about seven years, with the resulting connection being a fan called Mike Lovins (or McLovins) who would be the supporter of my early band efforts.

The second thing that occurred was my discovery of the Cleveland-based progressive band ‘Gravity’ in 2007. The music created by this quartet was simply unbelievable, but they had yet to develop any kind of online presence. Consequently, I was able to help them create a successful website and even book them a show in my hometown. Over the years, my friendship with the band grew to the point where, at one of their shows, they asked why I was not involved in a musical project myself.

I obviously lived and breathed music, thought of it constantly. I had taken piano lessons for several years at various points through my life. So I listened to my gut instinct and figured, why not? If I tried and failed, at least I can say I tried.

The initial venture of starting a cover band quickly gave way to making original music. Working with various individuals, I quickly discovered that my voice was not in the range of the Progressive Rock music I so desired. Moving to keyboards was the push for where I needed to go and soon my years of working with piano teachers quickly came back to me. At my advanced age it was a bit easier to learn the skills as I felt my mind had reached a higher understanding of logic and progression. Jamming groups and the initial bands gave way as numerous difficulties seem to constantly develop between individuals. I wondered if this would ever go anywhere at that point.

Now, back to that session with Chase, and the resulting practices with that group would at least prove to me that Chase was dedicated to the craft, unlike other people who only wanted to get together and ‘smoke’. When that group disbanded, Chase invited me to jam with some guys at his place up in Galion. Hesitations aside I drove and hour and that is when I met Carl Perry and Brian Randolph from ‘Calling Caine’. The resulting session proved to be extremely successful and we accomplished more in two hours than I had in the last two years. (We even had our first gig in four weeks of which we didn’t necessarily have our songs down but had a lot of fun.)

It was over the near year that ‘Picasso’s Dream’ was born. The next year would be a long exhaustive process of crafting our songs, working on details and fine tuning each performance. Our goal was simple, “to create something no one else was doing.” There would be many differences, the occasional frustrations, but when it clicked together it would sound amazing.

I would soon embrace the keyboard with a passion and connection that I never had before. Chase would constantly be thinking about the tones of ‘upper’ and ‘mid’ ranges. Brian would be constantly ‘searching’ for the right drum fills, and Carl would wait patiently until the songs ‘spoke to him.’ In the end, we created one impressive show, and after the hard work down at Signal Studios, one impressive album.

So what you hold in your hands here is a realization of a childhood, ...no... lifelong dream coming true. For myself, I have been lucky enough to make an album with three terrific and talented individuals. As I enter my 40th revolution around the sun, the realization that I should of done this a long time ago sits in my mind. However, the important fact to recognize is that “it doesn’t matter when you start the journey, only that you started.” (thanks again Matt from Gravity for that quote.)

Peace and looking forward to the future….

Mixed and mastered using a combination of Logic X and ProTools 10.

Chase would like to thank...
My whole family for surviving and putting up with me. Also: Chris Stecker at Metronome Music. Dave Campbell at Morrell Music. God for creating “All that is real.” Donny Roberts “The Twangler” for words of encourgement. Reptile Records for being ‘cool.’ Baird Stiles, Chuck Pearson, Cousin Kent, Jon, Harpo Bragg(RIP), Guy and Patti, Joe, Steve, Tod, Art H, Darrin, Jared, “Picasso”, Brian, Carl, Frog and countless others. I love you all.....to Infinity and Beyond!


Carl would like to thank...
My mother and father for coitis. Also to Darren David Eichhorn for the wonderful bass guitar and the staff at Signal Studios. All my bandmates past and present for the wonderful times and the great music. To all my family and friends without them this journey would not have been as enjoyable. And most of all the fans thanks for listening to us and rocking out. Last but not least, special thanks to my wife!

Brian would like to thank...
God. My wife Jennifer for putting up with all the noise that I make “I love you babe.” My kids Casie, Kyler and Kyndle for coming to see their old man at his shows; it means the world to me. My mom and dad, brother, sisters, brothers in law, sisters in law, aunts, uncles, neices and nephews for your love and support I love you all very much. My band of brothers in Calling Caine: Darin, Jared and Carl for sharing the stage, life, love, tears and happiness with me through the years; I could not ask for three better friends than you. My new band of brothers Carl, Chase and Anthony for the work you did on this CD–I believe it will stand the test of time. Sparky for capturing the best drum sounds ever, you rock! Jared for taking the time to mix songs on this CD with Anthony and myself. Bill, for the mixing you did as well. To the fans–listening and reading this–you make it all worth it, your the best! I dedicate this CD to my Dad: Gerald Randolph, life in this world is not the same without you, l love and miss ya pops R.I.P.

Anthony would like to thank...
Gravity (Matt, Eric, Brian, Joe and Vikram). Without their inspiration, guidance and friendship I would have never gotten here. McLovins, Sliclen, Budzinski, for helping get this off the ground. Michael Barnard for the awesome logo! Mrs. Patty and Debbie Brennan my awesome piano teachers crossing many years. Derrick Perry for running our sound during live gigs. My parents, sisters, cousins, aunts and uncles all alike. Thank you for putting up with my weirdness all these years. Ms. Sukle my beloved art teacher that always inspired creativity. Mr. Preuter who was a ray of hope during high school. All my dear and awesome friends! Dr. Howard Fradkin... for whom without... My dear Daniel my Angel... My beloved feathered children, past and present... subatomic particles that create electricity, periodic vibration that produce audio and of course Phil Collins...

Progressive Rock. The final frontier of musicianship. Setting new course for destinations yet unknown Picasso’s Dream sets themselves apart from the ordinary.

So step aboard the starship and come join us on the journey across the Universe. ... more

Bandcamp Daily  your guide to the world of Bandcamp

Alex Rita and Errol from Touching Bass feature in our special London edition of the Bandcamp Weekly.